A little under a year ago, I mentioned on the Ubuntu UK Podcast that I had contributed money to a project on PledgeMusic. If you’re not familiar with PledgeMusic, it’s basically Kickstarter for music projects. The project in question was Ginger Wildheart’s “Triple Album Project” – If enough people pledged money, he would record 30 tracks. Everyone who pledged would get the tracks, and the chance to vote on the top 12 tracks, which would be released to the world as a single-disc album.

The result of the project is this: 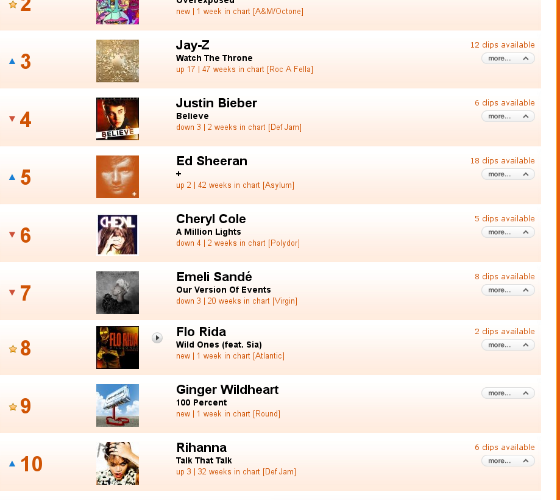 This is the UK Midweek Album Chart as it stands at the time of posting. The entry at Number 9 is “100%“, the single-disc album chosen by vote from the 30 tracks on “555%”, the triple album which was exclusively available to pledgers (I pledged extra for a physical copy – it’s also got the coolest packaging I’ve ever seen for a CD album).

The album’s entered straight into the top 10, among the likes of Justin Bieber, Cheryl Cole and Rhianna – all A-list celebrities with big record deals who are all over the mainstream media. This isn’t even a down to a big group of die-hard fans going out and buying the album – they already got a copy and more for pledging. This has happened through grassroots promotion, reviews, airplay, and word-of-mouth. No record company involved. I think that’s pretty amazing.

Ginger’s managed to pull this off because he’s got a big group of very loyal fans who trust him that whatever he records, they’ll want to hear it. He’s also a fantastic songwriter who knows a lot of talented people in the music industry, all of which makes this a really special album. It’s questionable as to whether the model would work on this scale with artists who don’t already have established fanbases, but even so, I think this is a major achievement.